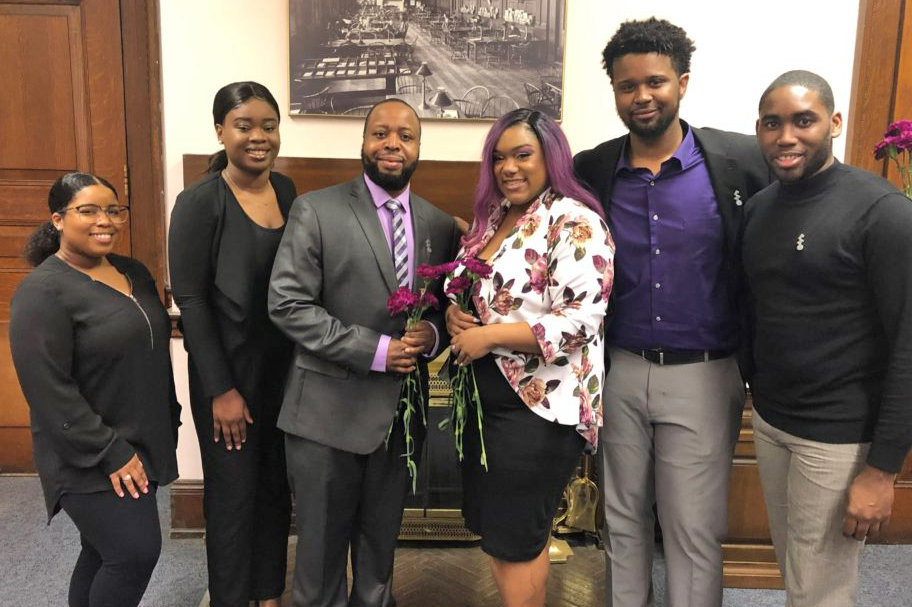 The Gamma Chapter of Gamma Xi Phi Professional Arts Fraternity was officially reactivated on May 4, 2019, with the induction of three new members. The ceremony was attended by Alpha and Beta Chapter members, and was officiated by National President Sharnell Bryan.
Gamma Chapter was chartered on June 9, 2014, in the city of Newark, New Jersey, by Gamma Xi Phi Founders Malcolm Minor and Nicole Stewart, who were in attendance at the induction ceremony.

Treasure Borde is a New Jersey-based poet, actress and educator with a degree in communication from Montclair State University. Borde is also a Newark, NJ native and longtime friend of Founder Malcolm Minor.

Keivon Hemmings, also known as Blind Eyez, is a Newark-based artist with a focus on hip-hop. Hemmings is a Ramapo College graduate with a bachelors degree in music, and also a longtime friend of Founder Malcolm Minor.

Dennis K. Philbert is a graduate of Newark’s Central High School and holds a bachelor of arts degree from Rutgers University, where he majored in Theatre Arts, Dramatic Arts and Speech. Dennis has performed in Off-Broadway plays, commercials, and appeared on television shows such as Blue Bloods, Madame Secretary, and a PBS special of the Shakespeare Sonnets, where he played a historian.

With the reactivation of the Gamma Chapter, Minor anticipates a new beginning and future activities in store that will contribute to the growth of Gamma Xi Phi and the Gamma Chapter. “We’re looking forward to what Gamma can bring to the city of Newark,” he said.